Ah, Did He Just Say Diction?

In Mary Oliver’s A Poetry Workbook, she writes, “For a poet, and indeed for any writer, diction has several components–the sound of the word; the accuracy of the word; and its connotation–the atmosphere, let us say, that is created by word choice.” It is interesting that she doesn’t call out correctness, as in how grammatically correct the word is inside the line and sentence. But maybe that is hinted at in “accuracy.”
I’ve been working on a manuscript of poems about the Midwest, St. Louis, and Superman for a while now and last night my friend David Rawson gave me some notes. He puts out lots of chapbooks and so has a good eye for this kind of thing. We got into it a little about diction. Here’s a review of his book Fuckhead in The Economy.
I’m thankful that I’ve got good readers and good friends to help me with my projects. Most of the time when I get a clique or suggestion from someone I trust, it is about something that already bothered me. The suggested change is something I secretly thought I could get past a reader.
David was bothered by the use of the “sweat” in the line, “We smoked, kissed, and sweat/ through our clothes.” Though it seemed to me that it was the way people speak and also the right word for the poem. Oliver writes about this impulse of contemporary poetry to be “written in a diction that belies that it was formally composed.” Poetic diction and the people were with me, but the grammarians were not. That’s why I drew this triangle. 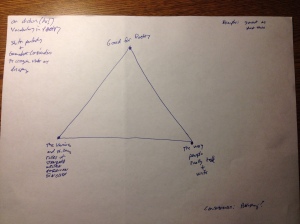 David teaches public school now and an obsession with correct usage is one of the occupational hazards. But even when we were teaching at SIUE, that cat could diagram some sentences. He won his share of spelling bees as a kid, too. But I think I might have convinced him with “sweat.” Either way we had a pretty good discussion about diction, how people talk, and the ever shifting tides of Standard American English. Consider this, the scholars at Harvard say that many irregular verbs in English (and other languages) are dying.
You can use Google N-Grams to chart the usage of these verbs like so. 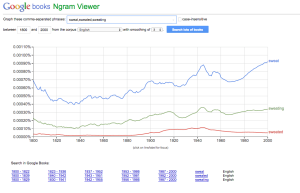 This is not the first time I’ve had to stop and think about this kind of thing. In the poem “Let Me Give You a Tour of the Place” the published version says “swum,” and I can’t even remember if I originally wrote “swam, swum” or whatever. But I remember it was a big deal that took up a lot of time in the workshop. No matter if they are grammatically right or wrong, I want my poems to feel that, as Oliver suggests, “They are not unlike a letter you might have received from a good friend.

This entry was posted on July 23, 2015 by Jason Braun. It was filed under Uncategorized and was tagged with A poetry workbook, David Rawson, diction, Fuckhead, irregular verbs, Let me give you a tour of the place, Mary Oliver, N-grams, poetry.